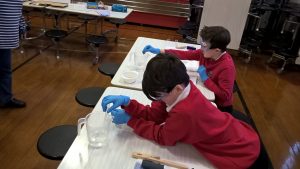 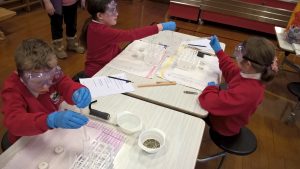 Sorry for tardiness in posting our activities this term. We are all very focused on getting ready for the Mad March Science Festival and the Young Scientists are leading the charge by helping test the hands on activities we shall use at the Festival.

12/1/2017 : As you can see from above, we were following up one of last term’s experiments. We had a strange result where our water, once we had put the seeds in it to demonstrate heat convection, no longer boiled at 100 degrees. We were wondering if this was because small bits of seed were acting as nucleii to allow the steam to form earlier upon them, or because the seeds themselves were discharging something into the water that affected it’s properties. Well we sort of felt it was probably both, but we had a terrible time trying to heat the test tubes with the tea lights. So it is clear, we really need some sort of portable bunsen burner.

19/1/2017 : So here it is, a portable bunsen burner and we gave it a test drive. Hotter flame than a tea lighter as you would expect (850 plays over 1100 degrees), has its own lighting mechanism and is nice and stable. Burns easily obtainable butane.

After testing that, the

Young Scientists started testing hands-on activities for the Festival – in this case a smashing maths game called “Maths Dice”. Needs a bit of classroom proofing – as the cardboard counters and flimsy cloth are too easily lost, so we’re fixing it to a magnetic board and using magnetic counters.

26/1/2017 : Dr. Jamieson, a retired GP came in today, supported by Gillian Masson, our local Brownie Pack Leader. The youngsters were testing another activity – a magnetic jigsaw which allows you to place on a board pieces so you build up a skeleton, muscles, heart, organs and teeth. So testing and learning at the same time!

The rest of the term we mostly focussed on getting ready for the Mad March Science Festival in celebration of British Science Week. Individuals and groups were encouraged to carry out their own mini-project : click here to see what they presented during the Festival (names have been covered or removed in line with child protection policy) : TARLAND YOUNG SCIENTISTS

Following the Festival, Jim McLean introduced the young scientists to computer science and the programming language Scratch and we had two sessions focusing on Scratch.